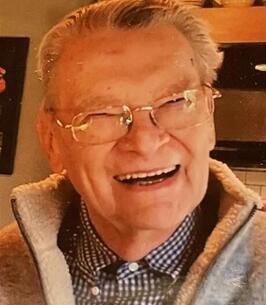 John Gleisberg of Stroudsburg died on Friday, May 20, 2022, from complications of living a long and wonderful life. He was born on December 10, 1931, to Max and Anna Gleisberg in Brooklyn, New York. John was a graduate of the Mechanical Course at Brooklyn Technical High School. While still in his teens he met the love of his life, Margaret. He proposed to her while stationed in Japan with the Air Force, and they were married in 1954. In 1956, they began their life together in Sciota, Pennsylvania. He was proud of saying that he lived in Sciota most of his life. John retired from Shaw Plastics in Stroudsburg after nearly 40 years. John was a Mets fan from the time of the club’s inception which taught him valuable lessons in hope, patience, and suffering. These lessons would serve him well as he developed a terrible golfing habit later in life. John was a steadfast “Vintage Mountie Maniac,” supporting Stroudsburg High School athletics and the Mountaineer Marching Band. He was kind without being a pushover, wise without being a know-it-all, and skilled without being a show off. He always rooted for the underdog in any case where it mattered. John loved jokes, Pineapple Upside Down Cake, and reading. His favorite book was Kipling’s Captains Courageous. He is survived by “his Peggy,” his wife of 68 years; his two daughters, Debbie Calhoun, and her husband, Jim, of Big Pool, Maryland; Patricia Milenkowic, and her husband, Paul, of Cherry Valley; and his son, Brian Gleisberg, and his partner, Nikki January, of Sciota. He had six grandchildren: Collin Calhoun, of Big Timber, Montana; Will Calhoun, and his wife, Sondra, of Springfield, Pennsylvania; Ian Gleisberg, of East Stroudsburg; Kirsten Milenkowic, of Roxborough, Pennsylvania; Aaron Gleisberg, of Stroudsburg; and Adam Milenkowic, of Hancock, Michigan. He also leaves a great-grandson, Oliver Calhoun, of Springfield. John was preceded in death by his brother, Rudy Gleisberg, of Centereach, New York. Burial will be private. The family will be receiving visitors at Kresge Funeral Home, 1763 Route 209, Brodheadsville, on Thursday, May 26, for an hour beginning at 4:00 p.m. In lieu of flowers or donations, the family asks that you be kind, be patient with one another, and perhaps do a favor for someone in need.